The challenge I have designing digital practices activities is trying to find an authentic activity that doesn’t fall apart. One of the key literacies of a person who makes effective use of the internet is the ability to confront uncertainty.

This is not how we were taught to learn. Clear objectives, clear success criteria. I mean, that’s great and everything, but my life certainly doesn’t look like that. Working on the web certainly doesn’t look like that. I believe that people sometimes need to learn to work building their objectives on the fly given what they’ve been confronted with. So how do I design activities that allow for people to learn to persist through that uncertainty and still be willing to accept half answers when that’s as far as they will get?

What is a meme?
I will leave you to your own research on the validity of the ‘scientific’ sense of the word meme and stick to the way it has been taken up in culture. Suffice it to say that many serious people think memetics is either very serious or total nonsense.

Culturally a meme is an idea (often a joke) that spreads. It’s an idea that becomes a marker of your membership in a given community. When I post a picture like this one… 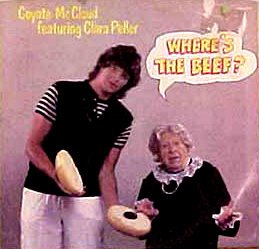 It would situate you in a community of people familiar with North American TV in the mid eighties. It’s an age group and a culture group. Lots of meme like qualities. I could, for instance, say “where’s the beef” at a BBQ where the burgers weren’t ready yet. Some people might laugh. Some people would be confused. Group A would smile knowingly at Group B and try to describe the commercial. Group B would probably not get it. Inevitably someone would say “you had to be there.” It’s a shared cultural reference. This is (partially) how our identity is built. We share cultural references, sometimes to classic literature, sometimes to TV commercials.

Memes now
It used to cost thousands of dollars to create a cultural reference. You either had to be famous, or have a giant marketing company – phrases like “cooking with gas” still exist in our culture long passed the point where people remember they were marketing slogans in the 30s. Now anyone can try and start a ‘meme’ that could spread from person to person and become part of our daily language. It happens fast. It happens often. You will not be able to ‘keep up’.

Luckily the history of some of those memes are relatively accessible on the internet and they can be quite interesting. The class I was teaching recently (ages 30-60) came together when we did the meme history on this poster

It’s a nice, mostly clean narrative. It has an answer. A quick google search will get you there. (see me modelling good digital practice 🙂 ) Another activity that seemed to work well was the ‘where are they now’ meme search. Seeing the people pictured in memes as real people brought home to everyone that, you know, the internet is full of real people. Who have feelings. A little kid pictured in a silly picture becomes a big kid some day… who’s picture is all over the internet.

[note: be careful with these searches, searching for memes can bring you to places that can put nasty things on your computer]

The answers are not all easy… or nice
There are a number of ways to track down a meme. You can go to a website like knowyourmeme that does some research on how they developed. Some of them are quite detailed, others I can’t seem to find. Any number of different google searches or reverse image searches might get you to the story of how some of these were built. They also can get you to the root meaning, and sometimes, that meaning is not very nice.

A number of these memes were originally created in some of the darker corners of the internet (arguably the ‘lets put text on an image’ sense of meme started in those spaces) and there are often some fairly ugly first meanings for those memes. They can be a way to insult, bully or otherwise demean people on purpose. That also can happen without you even knowing it if you are sharing a meme you don’t have a full grasp of.

And, frankly, sometimes I have been wholly unable to track down the original history of a given meme. It makes for a frustrating class when your students can’t find what they are looking for. My advice is to prepare a few like the ‘keep calm’ one and then let them loose (depending on age obviously) on some less certain ones.

WHAT ABOUT THE CHILDREN?!? – Why meme histories are important
This is what makes the meme history such an interesting (if fraught) journey. Meme commentary (using a meme to comment on someone’s postings) is a pretty common activity. In the years that I was mentoring young adults I can think of a dozen times where I sat down with one of them to discuss the content of their meme. “Do you think that might be racist?” “Did you mean that in a kind way?” “When you say you were just trying to be funny… walk me through what was funny about it.” “Where do you think that meme comes from?”

And some of them are perfectly innocent. They are straight cultural references that allow people to share identity with each other. Others are not so much. Whether you’re doing it as a classroom activity or as something your talking to your friends or your kids about, I think thoughtful discussions on meme history offer an opportunity to bring our moral compass to the internet.