A recent paper entitled “The rhizome: A problematic metaphor for teaching and learning in a MOOC” caught my attention. It critiques Rhizomatic learning and the rhizo MOOC #rhizo14 in particular. It wasn’t easy to read, but one point about vulnerability stuck out for me, and resonated as something that needs thinking through in all learning contexts.

“I think we do need to notice that a new sort of resilience needs to be nurtured.”

It stuck with me. I’ve kind of taken it as an injunction. I wish I knew who had said it, because I have a pile of thanks to offer that person. We DO need to notice it. I’ve written two posts earlier this year dealing with the idea of resilience as it relates to two different educational contexts – students moving from one educational context to another and my own attempts to learn new things. I will sidestep (for now) the question of whether the resilience required is ‘new’ or not, but I’ve been playing with a model of what that internal narrative of resilience could look like for someone learning on the web. I was going to say ‘open web’ but the near ubiquity of spaces like Facebook, which are distinctly not open, require their inclusion as the vast majority of people who will be learning online will at some point end up in one of these corporate learning spaces.

What I’ve been working with so far
In 2010 George Siemens, Bonnie Stewart, Sandy MacAuley and I did a SSHRC funded research grant on the (at that time) new concepts emerging around MOOCs. One of the central questions we had asked ourselves was about the patterns that we could find that lead to success in a MOOC. 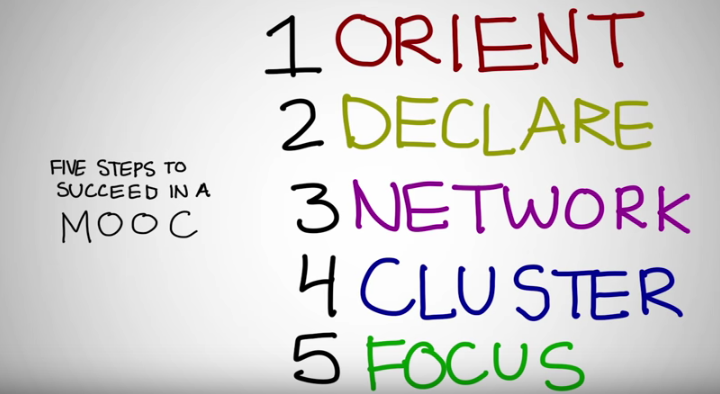 Six years later I’m still broadly comfortable with this as the external process by which someone starts to learn and succeed online. Whether someone goes ahead and makes it all the way to focus/outcomes part of this process is up to them and the process need not really be this linear. Overall, though, I’m still happy with it. We need to Orient ourselves, get a sense of what is going on, what the general rules of engagement are. We need to Declare who we are, need to have a place for our identity to stand. We need to Network with others. We need to find people who we can work with and Cluster with them. Then we can, if we wish, Focus on some sort of outcome, though i feel less strongly about this as a necessity.

What this doesn’t account for
But that’s all external. That’s what it looks like while/after it’s being done. How do we, as Kate so elegantly puts it – “support students to propose their own narrative of purpose”?

@markdrechsler @davecormier @MarciaDevlin We can support students to propose their own narrative of purpose, not just mould them to ours.

As our injunction dictates, we need to account for the resilience required to confront the learning process without the safe structures and comforting space of a ‘learning objective’ or a teacher telling you you’ve done it right. We need to acknowledge that learning in a network/community/wild space means that sometimes there will be uncontrollable interactions. You will be confronted by what a colleague today referred to as ‘aggressive academic hectoring’. There is privilege always. How do we maintain the advantages of rhizomatic space and still give people the tools to be resilient?

A new model
In my last post, I presented a model for how we can talk about resilience for a student in terms of how they might fit in a university. The model is meant to be both an emotional guidepost for students new and old and a reminder to those of us supporting them of what our goals are. 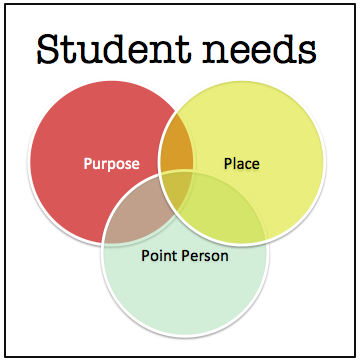 It’s occurred to me that the same thinking process might be useful here. If we translate some of the language closer to what we’ve been exploring with regards to learning in a world of abundance, we might get something like this. The idea of ‘purpose’ matches up for me with ‘learning subjectives‘ which we were exploring last year – Designing for when you don’t know where you’re going. The sense of place feels very comfortable as community. The third one is interesting… every student examplar we’ve found for resilience and much of the research suggests that ‘a person of somekind’ (as opposed to lots of people) is super-important. 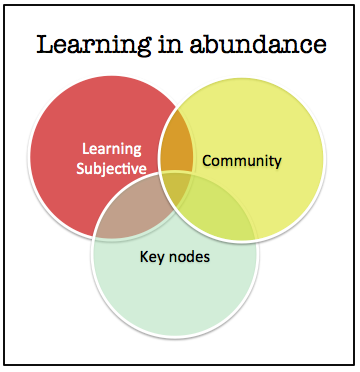 I’m still just mulling this over, so I’m not going to go to far with this. The learning subjective is the thought, idea, need… the thing that got you started into this and your constantly reassessed perspective on it. It’s different from an outcome/objective in that you don’t know where it’s going. More importantly, no hierarchically approved agent has decided that it is the the ‘thing you need to know’. The community is the place where thinking resides. There are healthy communities and unhealthy communities. It’s not a perfect situation… it’s the discourse on the thing that you are interested in. The big difference now is that this discourse can be had with living people instead of the thoughts of living/dead people printed on dead paper. The narrowed perspective and finalized thoughts of the text are replaced with the uncertainty of the community space. The key nodes are thoughts/people/things that you start to see as guideposts along the road. They are ideas/people that you can turn to for direction, for help, to find out where help is.

Process of resilience
In accord with the Viv Rolfe quote in the last post, we want to think of resilience as a process rather than some innate quality that people have. This model then, is a suggested process that might help folks who are trying to engage in learning when there are an indefinite number of options/connections/approaches/solutions to the things they are interested in. When that thing they are involved in is simple (like a location on a map) or complicated (like a recipe) this is not such a big issue. If they are engaged in learning something complex this sense of resilience becomes more important. 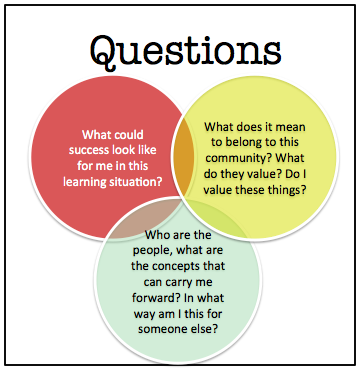 Moving forward with a model
Is it useful to have a model like this? What questions should be in the circles? How can we introduce people to the process of re-examining their own subjectives, the community of learning (the curriculum) they are approaching and the key people and concepts in it? Resilience in the sense of enduring adversity successfully only works when we know what ‘success’ looks like. In a world of abundance, the learner needs to constantly evaluate what they want, what knowing looks like (the community) and reassess their touch points.

20 thoughts on “In search of a new resilience for learning”